Semantic search seeks to improve search accuracy by understanding the content of the search query. In contrast to traditional search engines which only find documents based on lexical matches, semantic search can also find synonyms.

The idea behind semantic search is to embed all entries in your corpus, whether they be sentences, paragraphs, or documents, into a vector space.

At search time, the query is embedded into the same vector space and the closest embeddings from your corpus are found. These entries should have a high semantic overlap with the query. 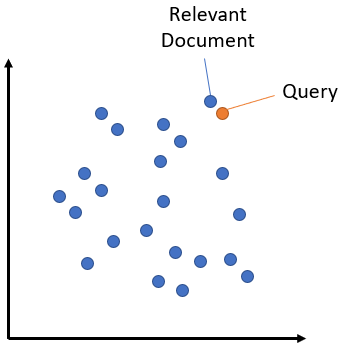 A critical distinction for your setup is symmetric vs. asymmetric semantic search:

It is critical that you choose the right model for your type of task.

For small corpora (up to about 1 million entries) we can compute the cosine-similarity between the query and all entries in the corpus.

In the following example, we define a small corpus with few example sentences and compute the embeddings for the corpus as well as for our query.

We then use the util.cos_sim() function to compute the cosine similarity between the query and all corpus entries.

For large corpora, sorting all scores would take too much time. Hence, we use torch.topk to only get the top k entries.

For a simple example, see semantic_search.py:

Instead of implementing semantic search by yourself, you can use the util.semantic_search function.

The function accepts the following parameters:

This function performs a cosine similarity search between a list of query embeddings and a list of corpus embeddings. It can be used for Information Retrieval / Semantic Search for corpora up to about 1 Million entries.

Returns a list with one entry for each query. Each entry is a list of dictionaries with the keys ‘corpus_id’ and ‘score’, sorted by decreasing cosine similarity scores.

By default, up to 100 queries are processed in parallel. Further, the corpus is chunked into set of up to 500k entries. You can increase query_chunk_size and corpus_chunk_size, which leads to increased speed for large corpora, but also increases the memory requirement.

To get the optimal speed for the util.semantic_search method, it is advisable to have the query_embeddings as well as the corpus_embeddings on the same GPU-device. This significantly boost the performance.

An advantage of ElasticSearch is that it is easy to add new documents to an index and that we can store also other data along with our vectors. A disadvantage is the slow performance, as it compares the query embeddings with all stored embeddings. This has a linear run-time and might be too slow for large (>100k) corpora.

Searching a large corpus with millions of embeddings can be time-consuming if exact nearest neighbor search is used (like it is used by util.semantic_search).

In that case, Approximate Nearest Neighor (ANN) can be helpful. Here, the data is partitioned into smaller fractions of similar embeddings. This index can be searched efficiently and the embeddings with the highest similarity (the nearest neighbors) can be retrieved within milliseconds, even if you have millions of vectors.

However, the results are not necessarily exact. It is possible that some vectors with high similarity will be missed. That’s the reason why it is called approximate nearest neighbor.

For all ANN methods, there are usually one or more parameters to tune that determine the recall-speed trade-off. If you want the highest speed, you have a high chance of missing hits. If you want high recall, the search speed decreases.

Three popular libraries for approximate nearest neighbor are Annoy, FAISS, and hnswlib. Personally I find hnswlib the most suitable library: It is easy to use, offers a great performance and has nice features included that are important for real applications.

In the following we list examples for different use-cases.

semantic_search_quora_pytorch.py [ Colab version ] shows an example based on the Quora duplicate questions dataset. The user can enter a question, and the code retrieves the most similar questions from the dataset using the util.semantic_search method. As model, we use distilbert-multilingual-nli-stsb-quora-ranking, which was trained to identify similar questions and supports 50+ languages. Hence, the user can input the question in any of the 50+ languages. This is a symmetric search task, as the search queries have the same length and content as the questions in the corpus.

semantic_search_publications.py [ Colab version ] shows an example how to find similar scientific publications. As corpus, we use all publications that have been presented at the EMNLP 2016 - 2018 conferences. As search query, we input the title and abstract of more recent publications and find related publications from our copurs. We use the SPECTER model. This is a symmetric search task, as the paper in the corpus consists of title & abstract and we search for title & abstract.

semantic_search_wikipedia_qa.py [ Colab Version ]: This example uses a model that was trained on the Natural Questions dataset. It consists of about 100k real Google search queries, together with an annotated passage from Wikipedia that provides the answer. It is an example of an asymmetric search task. As corpus, we use the smaller Simple English Wikipedia so that it fits easily into memory.

retrieve_rerank_simple_wikipedia.py [ Colab Version ]: This script uses the Retrieve & Re-rank strategy and is an example for an asymmetric search task. We split all Wikipedia articles into paragraphs and encode them with a bi-encoder. If a new query / question is entered, it is encoded by the same bi-encoder and the paragraphs with the highest cosine-similarity are retrieved (see semantic search). Next, the retrieved candidates are scored by a Cross-Encoder re-ranker and the 5 passages with the highest score from the Cross-Encoder are presented to the user. We use models that were trained on the MS Marco Passage Reranking dataset, a dataset with about 500k real queries from Bing search.